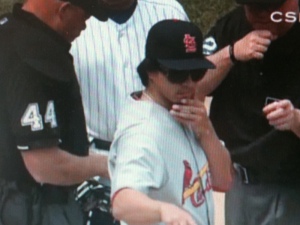 Double Take: Who's that Manager? Image captured from MLB Video

While St. Louis Cardinals manager Tony LaRussa is recuperating this week, his doppelgänger appeared Thursday afternoon at Wrigley Field prior to the Cardinals-Cubs game to turn in the line-up card. Chicago Cubs manager Mike Quade didn’t take the card out, but did a double-take from the dugout. So who was the mystery man dressed up as TLR? Kyle Lohse.

“I’ve been doing the Tony here for a couple of days, just trying to keep it loose in here,” said Lohse. “My hair’s getting out of control, so I realized when I didn’t jell it up, it hangs over my ears. So throw the hat on and you got Tony.” Lohse’s dead-on imitation included wearing La Russa’s actual jersey, sunglasses that resembled TLR’s trademark shades, and arranged his hair to look like Tony’s coif. WATCH THE VIDEO HERE. As you can see, the prank drew huge laughter in the Cardinals dugout, and even the opponents were amused.   Lohse admitted he caved to peer pressure as his co-conspirators eventually convinced acting manager Joe Pettini to go forward. “I went and found his jersey and threw it on … It kind of escalated from there; got worse. I got deeper and deeper involved and I couldn’t say no. … I was a little nervous,” said Lohse. He had good reason to be since everyone knew that TLR would be watching the game. “The Tony” sent a text to Chicago indicating his approval. I’m sure he was even happier after the Cardinals thumped their rivals 9-1 to take the series. Tonight Lohse will face the Cincinnati Reds in an effort for the Cardinals to extend their first place lead in the NL Central.