UPDATE: NOT GUILTY! Kansas City Royals Mascot on Trial for Assaulting Fan with a Hot Dog! 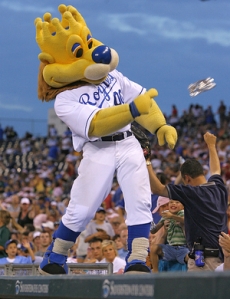 UPDATE: The Kansas City Star just reported that the jury only need an hour to clear Sluggerrr of any wrong doing in the case of the hot dog turned missile.

The Kansas City Royals’ mascot, “Sluggerrr,” is on trial for assaulting a fan with a hot dog. Sluggerrr is accused of harming a fan with an airborne hot dog. “A hot dog flung by Kansas City Royals’ mascot Sluggerrr allegedly caused serious and lasting injury to the left eye of [a] baseball fan … on Sept 8, 2009.” The wrapped hot dog allegedly came out of Sluggerrr’s hand as he tried to throw it behind his back and into the crowd. The victim’s lawyer says his client “suffered a detached retina and has undergone three surgeries to correct the damage.” During cross examination, the Royals lawyer showed video of a toss he made during a 2009 game and invited him to discuss the hot dog’s “arc” and “velocity” as it sailed away. “Sluggerrr” stayed away from the technical language.“I would try and put more mustard on it,” Sluggerr said. “I guess that’s appropriate for a hot dog.” Byron Shores, who wore the Sluggerrr suit from February 1996 to October 2009, said he had no recollection of the throw that purportedly caught the victim in the eye and didn’t learn of the allegations until just before he was fired. Shores claims he was never told the reason why he was terminated. The alleged victim had attended more than 175 games. The civil trial is expected to last into Thursday. More info at the Kansas City Star.