My Rant: Who were the 5 People who Narked on Cincinnati Reds Smoking Cigars During NL Central Celebration? 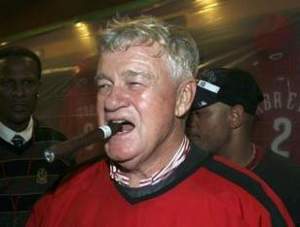 Before my rant begins here’s the story: The Cincinnati Enquirer reported Friday that the Cincinnati Health Department will investigate the Cincinnati Reds for violations of the Ohio state smoking ban after five people complained players smoked cigars indoors while celebrating their National League Central Division title Tuesday. Several players could be seen on TV smoking the cigars, and Reds owner Bob Castellini was passing them out. But video doesn’t affect the investigation – the health inspector has to actually see someone smoking, according to a health department spokesman. Seriously? What the hell is wrong with these people? The Reds nab their first playoff spot in 15 years and people, who are obviously watching the celebration, decide to call the health department for celebratory stoagies? We’re not even talking second-hand smoke here! These people are sitting in their dens (!) and, you just know, it’s probably some uptight suburban moms, who live for hand sanitizer and peanut-allergy free restaurants. They probably never been to a game a Great American Ball Park. Sad, very sad. On the other hand, this could be a ploy by the health department team to get “free” playoff tickets and locker room visits. Either way, it’s just wrong.