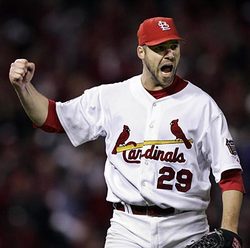 In the “How Did These Teams Crash & Burn?” series, St. Louis Cardinals’ right-hander Chris Carpenter threw his first complete game of the season in the Redbirds 6-1 victory over the Colorado Rockies. According to Elias Sports Bureau, Carp (16-9) tied the major-league record for most starts (35) into a season at the time of a pitcher’s first complete game. He now shares that distinction with Bob Shirley of the 1977 San Diego Padres.